To God goes the glory!

A Bit About Cinnamon

Cinnamon (along with Max) was one of our "accidental" rescues. He had considerable back problems when he arrived, but was much improved with rest. He is an Appaloosa and the only horse we know with actual eyebrows. Cinnamon is a cantankerous old man (late 20s), is semi-retired, and has lots and LOTS of Appy-tude. He has a beautiful blanket, snowflake pattern in his spots, and a fabulously long tail. Cinnamon cannot stand to see a single pellet go to waste, and is often seen vigorously vacuuming around the feed buckets in each stall after meals.

Being such a grumpy old guy, Cinnamon much prefers his solitude (although he has been known to hang out with Shadow on occasion). Mad Max is his arch nemesis; and the two of them are often spotted (haha) bickering at the hay roll. Former stall mates, Cinnamon's feed bucket was moved up the hill and around the corner (fencepost), faaar away from Max. Apparently this is not quite far enough to suit, as Cinnamon will nudge his bucket farther away a bit at a time until he has found his happy place somewhere just south of Siberia; which might be far enough away...

Although he will let you pet him, he'd much rather smell your breath. That is, of course, unless you've had onions for lunch.

Other Sites to Visit 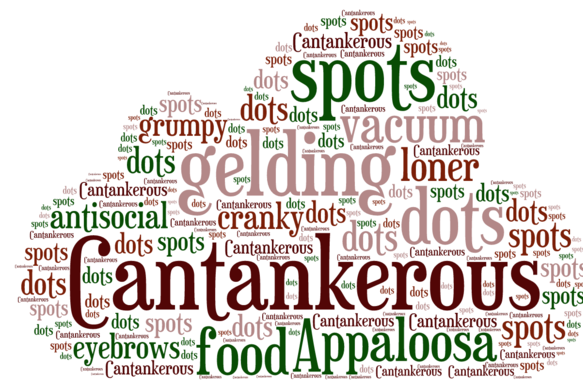