Even if you think you know a horse's history, there can be any number of things that are missing from the equation.  Horses carry emotional/mental baggage just as people do. Scar tissue can definitely hide a "still open wound" on the heart.  Any time a horse that has been traumatized in the past is placed in a new environment, there is always regression. How much regression is likely contingent upon the amount of trauma inflicted. These horses benefit most when given a much longer period of adjustment. A steady, unchanging routine can be your biggest ally there.

Having read through so many of the horrible "training" methods employed by some in the Walking Horse Industry to generate that coveted" big lick", I would definitely classify such methods as traumatic and life threatening when viewed through the eyes of a horse. In Shadow's story, when you add in the rake as a trigger and resulting meltdown as a flashback and what do you get? PTSD pure and simple. If you are unfamiliar with the term "Big Lick", please visit my page on soring here for more information.

Still having doubts? Read this definition and see if anything I highlighted rings a bell...PTSD is an anxiety disorder that occurs in the aftermath of a traumatic event. Examples are combat, rape and natural disasters.  There are three major types of PTSD symptoms. First, the traumatized person generally develops a heightened startle response and easy arousability and irritability. This change in mood and startle is relatively permanent and biological in nature, as if the traumatized person's nervous system has been 'reset'. Second, they are vulnerable to having memories of the trauma come flooding back into their minds at unexpected moments (flashbacks). Third, they will go to great lengths to avoid thinking about the trauma. These avoidance measures vary from not going near anything that reminds them of the trauma to dissociation.

Sure does make you wonder, doesn't it?

So what's The Moral of the Story?

Posttraumatic Stress Disorder (PTSD) is an anxiety disorder that can occur after you have been through a traumatic event. A traumatic event is something horrible and scary that you see or that happens to you. During this type of event, you think that your life or others' lives are in danger. You may feel afraid or feel that you have no control over what is happening.

It was a very very close thing, but I didn't sell Shadow.  Looking back, knowing what I know now, it's a wonder that he didn't just keel over from a heart attack (the poor guy).  We "started all over again", my Shadow and I.   I was careful to the point of paranoia about rakes and shovels; anything that had a handle and it was a long, long time before I attempted to tie him again.  I'm awfully glad we didn't sell him as I would have missed out on a wonderful horse; I credit Shadow's generous heart and willing spirit for much of his recovery.  Things still come up periodically (I cannot pick his feet in the winter while wearing gloves (took me a little while to figure that one out). I'm guessing that because riding gloves are worn in the show ring, there's still a negative association there. We're working on it though! ;o)

One afternoon, while the horses were eating, I thought I would rake up some of the leaves that were all over the ground by the hitching post so the horses wouldn't eat them.  I picked up a nearby garden rake, intending to show Shadow before I started working. I didn't want to scare him with it, and wasn't sure if he'd even seen a garden rake before.  Unfortunately, he had. The second I picked up the rake and turned to face him, he exploded.  He let out a horrible scream, reared straight up and threw himself backwards hard enough to snap that heavy post like it was a twig.  What I saw next was even more frightening: Shadow, blowing in terror and his eyes rolling wildly, had frantically scrambled backwards but still remained attached to the ring on the broken post. The center piece of wood, which had snapped and splintered, was now pointing straight out towards the opposite post with Champ still attached!  I'm pretty sure my heart stopped for a moment here.  After considerable time, while speaking softly, I was able to approach Shadow (who was breathing like a freight train and shaking violently from head to toe). My daughter went to Champ and managed to unhook him before anyone was physically hurt.  I don't know that I've ever been that scared in my life; it had all happened so fast.

We had temporarily set up a hitching post of sorts, until we could build some stalls.  At the rate Shadow gobbled his feed, he was also able to polish off Champ's, so we ended up tying them at opposite ends of the hitching post for meals.  Since horses are rather large, my husband had used very heavy timbers to form a long "H", and we put rings to tie the horses on the posts above and to one side of their buckets.  We always stayed around there while they ate, because it just didn't seem like a very good idea to walk off leaving 2 horses tied up (although I know people do it "all the time").

It took that poor man over two hours to load Shadow into the trailer; I see this as the initial event leading to his eventual meltdown, (the total change in environment simply compounding his rekindled fears).  I believe that in Shadow's mind, Shadow + Trailer = VERY BAD THINGS. I remember the farmer being absolutely baffled by Shadow's adamant refusal to load; especially after Champ jumped right on in.  Over the next couple of weeks, we did some casual riding around the pasture and Shadow seemed fine other than being a little tense and easily spooked.  The biggest problem I had was trying to clean his feet; he was most uncooperative and very reluctant to pick them up.  He would, after several minutes of soft encouraging words and lots of patience pick them up, but it was usually accompanied by a nervous snort or two and he would remain extremely tense until his foot was back on the ground (of course now I understand that part, too).

When things began to unravel

A Bit of Background

Shadow and Champ (both Tennessee Walking Horses) were 8 1/2 years old when we got them.  They had been living together waaaay out in the country for about 2 years before we came along.  Nice, quiet - no traffic - peaceful, country living.  We had been told by their owner that he had purchased the two horses together from a woman in Florida who had them for about a year.  She had gotten Shadow around the age of 5 from "a big show farm" where he had been used for showing and as their stud.  Unable to control him, however, the woman had him gelded (this did not solve the problem, of course, so she then sold him to the man we got him from).  So, here is Shadow's history as we knew it at the time of purchase:

Birth - Age 4  He lived on a large Walking Horse horse farm and was used for shows and at stud
Age 5 - 6  He was sold to a woman in Florida who had him gelded because she couldn't control him
Age 6 - 8 1/2  He was bought by a farmer in rural Alabama for his grandson to ride, and had been living there for just over two years

Try Before You Buy, Right?

Wanting to be [absolutely] sure, we made 3 or 4 trips out to this farm to see Shadow, rode him, groomed him, and generally spent enough time there that we felt confident this was a nice, quiet horse for us to own.  The farmer and his wife were getting older, and the grandson had lost interest in riding, so he was selling both horses.  Of course being a couple of soft touches, we bought Champ too (didn't have the heart to separate them after they'd been together so long :o) and we made arrangements for the farmer to deliver both horses.

Somewhere in the middle of posting Shadow's page this whole thing hit me (hard).  Now I'm not a doctor, nor do I claim to be some frighteningly brilliant individual - I will admit, however, to a defective "off" switch on the brain (a friend once told me I have entirely  too many thoughts :o)  I am not attempting to make light of this issue or make jokes, however. To the contrary, if you stop and think it through carefully it makes total sense.  We all know that horses are highly sensitive creatures (emotional, if you will) and can be extremely empathetic in their intuitiveness ~ when viewed that way, it's really not much of a leap at all.

I'm going to use Shadow's history and our own personal experience to illustrate my point...please factor in, however, that at the time we purchased him, we knew absolutely nothing at all about the TWH show industry, soring or stewarding a horse (believe me, now we do!)

PTSD In Horses - What do you think? 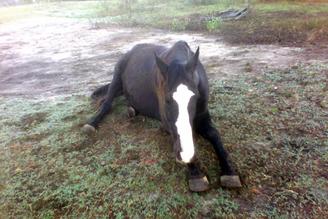 I'm just theorizing here,  but... What if horses suffer from posttraumatic stress disorder (PTSD) just as people do?  Have you ever heard someone say, "I don't know what happened; he just went crazy!" when recounting a wild ride on a "spooked" horse?  One that suddenly threw them?   Or maybe you witnessed a seemingly spontaneous "meltdown" on the ground?  I have, lots of times.  Well what if it wasn't just a spook? What if it was something much bigger?  Let's look at the definition of PTSD as outlined by the US Department of Veteran's Affairs:

To God goes the glory!